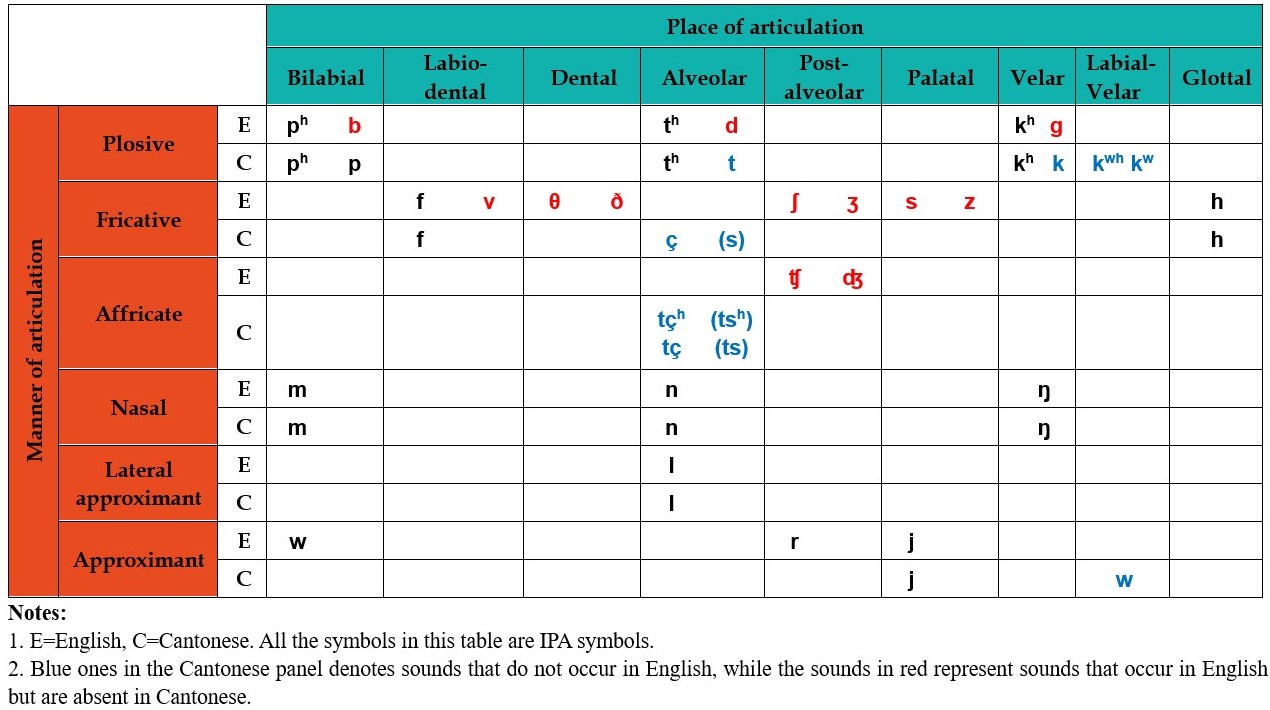 The following seven English consonants DO NOT exist in Cantonese and DO NOT have similar counterparts in Cantonese, therefore, present some problems for Cantonese ESL learners.

Table 2. English consonants that do not exist in Cantonese

/n/ also exists in both English and Cantonese. However, many Cantonese speakers tend to replace /n/ with /l/ e.g. there is often an unclear distinction between:

This unclear distinction between /n/ & /l/ can also be found when Cantonese ESL learners speak English, for example: I’m sorry, I don’t low (I don’t 撈) /ləʊ/ vs  know /nəʊ/.

In English, the consonants /b d g/ are voiced. These sounds also exist in Cantonese but they are not voiced. In English, the main distinctions between /p/ & /b/ are voicing and aspiration, but in Cantonese, [p] & [b] mainly differ in aspiration, both sounds are voiceless. This difference leads to a tendency in many Cantonese ESL learners to have weak voicing for voiced English consonants, for example:

It is important to note that in Cantonese, final plosives [p]; [t]; [d] are NOT RELEASED. For example, to say the word 給 [kap], the lips are closed at the end, ready to produce the final plosive [p], but the lips are not opened again and there is no release of air, as in the case of English plosives. Similarly, to say the words 別 [bit] and 陸 [luk], there is no release of air when [t] and [k] are produced.

Consonant clusters are very common in English. They can be at the initial, medial or final positions of a word, and they can consist of a cluster of two or more consonants:

Since there are no distinctive length contrasts in Cantonese words, e.g. 別 [bit]; 活 [wut]; 落 [lok], many Cantonese learners fail to distinguish between the following long and short vowel pairs in English:

Many Cantonese learners find it difficult to distinguish between /æ/ and /e/.  Many tend to substitute /e/ for /æ/, e.g.

Some Cantonese learners may confuse /ɜː/ with /ɔː/.  The following are two authentic examples that had caused misunderstanding:

A student wanted to apply for a day of leave, he told his lecturer:

Probably due to the influence of the Chinese words 耳/醫 [ji], many Cantonese learners tend to insert /j/ before words that start with the vowels /ɪ/ and /i:/, e.g.

Cantonese learners often have problems with the diphthong /eɪ/, especially when it is followed by a nasal /m/, /n/ or a lateral /l/, e.g.

English diphthongs /aʊ/, /aʊ/, /aʊ/ exist in Cantonese but tend to be pronounced with quicker and smaller lip and jaw movements.  Influenced by their L1 (first language), many Cantonese learners tend to have problems with the following words: